One of the great things about working with wine is the people you meet around the world.  The personalities, their stories, the shared fun amongst a million other things.  Oh course there is hard work, but at the same time being around fine food and wine isn’t half bad and makes up for the hard stuff.  At Elderton we are soooooo lucky that we have amazing distribution in most of the civilised world, which even includes Perth and Hobart.  In Perth below we have a little powerhouse Aussie (part of a dynamic duo) who speaks with a pronounced French accent.  From the photo Thierry still doesn’t believe I write a blog, but secretly I think he likes it.  Thanks for looking after me big little guy.

Another example in that team is Ces from Hobart, who is on the phone in the photo below saying that he is sick and tired of drinking Tasmanian pinot.  About bloody time I reckon.  I overheard him on the phone saying ‘give me a wine that is full bodied, like Barossa Shiraz’.  The Taswegiens would be doing themselves a favour drinking more of the stuff considering how cold and wet it was down there. 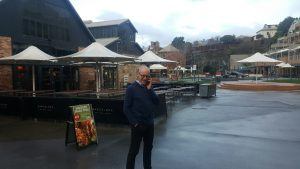 The following week Al, Richard, Peter and I ventured off into the land of dry Semillon – namely Australia’s Hunter Valley for the purposes of our annual study tour.  Fortunately it was much warmer than last year’s trip to NZ’s North Island – thank the wine gods for that one!  Also we were not mercilessly teased by Kiwis about our country’s rugby prowess on this trip. We were however graciously hosted by Audrey Wilkinson Wines and James Agnew.  For the record he used to be a pirate and still can’t get over it.  He also has a soft head. 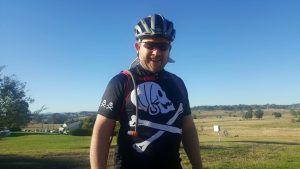 We also spent time with Bruce & Chris Tyrell from Tyrells – what gentlemen.  They deserve every accolade they have received over the years.  We loved their old cellar dirt floors, not that we are going to bring that idea back to the Barossa – see below as it has been done. 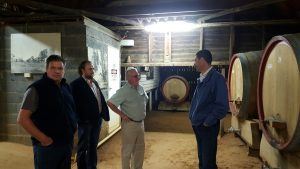 We also loved Brokenwood, their iconic Graveyard vineyard and their plans for the future.  Here is a photo of Peter (trying so hard to smile) and me in that vineyard.  We loved the wine.  Great body and tannin structures.  It reminds me of James ‘Mr Barossa’ March who has often commented that he loves in particular the Graveyards from the 1990s. 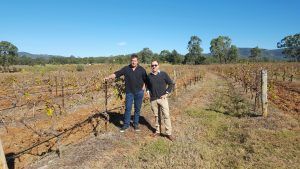 Also a special mention must go to Mike De Iuliis from De Iuliis wines, who is a very funny man and making some cracking booze.  Peter was also not smiling then either. 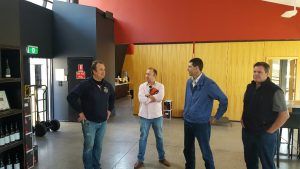 Here is Richard last Friday night at the Sydney Football Stadium gloating mid-game over the Waratahs eventual victory of top of the table Chiefs – they are from NZ’s North Island if unsure.   Considering our last study tour mentioned above, this photo was definitely not sent to any Chiefs fans on the night, well not intentionally anyway and for that matter not before we were absolutely certain that the Tahs would not let us down….

Cameron ‘Still not a massive fan of writing blogs’ Ashmead