We love having visitors in our Cellar Door from around the state, the country and the world. Each visitor has a different knowledge of wine, winemaking and viticulture. As such, we get some great questions from our visitors that allow us to provide insight into the influence that the environment and the vineyard can have on the finished product – our wines! We have picked some of the more frequently asked to share with you our thoughts.

Why does Elderton choose to use screwcap for most wines, rather than cork?

This can be quite an emotive issue and has been a discussion point for many wine writers, wine makers, and many a consumer.

Elderton first used Stelvin in 1999 on the Eden Valley Riesling, before Clare producers began their use of the closure. The first Command bottled under Stelvin was the 2001 vintage. And we continue to bottle nearly all of our wine under a screwcap closure. We choose screwcap for the majority of bottling for consistency.

In 2010 a 10-year Australian Wine Research Institute (AWRI) research project was finalised and proved that screw cap closures allow wines to mature whilst still retaining freshness and consistency from bottle to bottle.

Thousands of bottles of a 1999 Semillon from the Clare Valley were sealed under 14 different styles of closure for the study, including natural and synthetic corks and one sample under screw cap. The study was carried out to determine the best performing cork. A screw cap, instead of a cork, topped the results.

Above: From the AWRI trial, 1999 Semillon 125 months after bottling under different closures, screw cap closure on the far left (first bottle)

You can check out more progress photos here.

In December 2012, over a three day period, Richard, Cameron and Allister tasted and re-corked the older Hermitage/Shiraz and Command bottles from the museum (1982 – 1991 vintages). In January 2013 they did the same for the older Cabernet. The wines were processed in batches – by the dozen as per the wines’ storage in the museum. 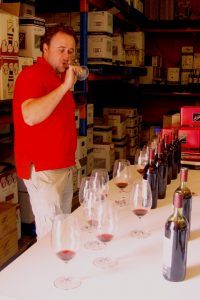 The 1984 Hermitage bottles opened for tasting and recorking, and Allister tasting a batch

Allister’s notes from the final day of Shiraz tasting:

“It has been a full on 3 days of trying, tasting and adjudicating on the Shiraz from our museum of wines from the 80s to the very early 90s. Doing this has proved the saying ‘there is no such thing as a great old vintage, just simply great bottles’ beyond doubt. It has been both inspiring to see some great wines and equally heartbreaking to see wines that have been spoiled by faulty corks – with both TCA and oxidation being a major issue.

The other real points of interest are that the lower alcohol wines simply have not stood the test of time as well as the wines around the 14% mark. Equally, the old vine material (Command planted in 1894) is head and shoulders above the estate wines in all vintages.”