Ever stayed in an AirBNB without proper beds? I have…

I fully recognise and admit that I am very fortunate getting to travel the world to talk all things Elderton, it normally gives rise to meeting some great people and a few fun stories here and there.

I have just landed back in Australia after spending 2 weeks on the road in the US. One of the ‘highlights’ was visiting Oxford in Mississippi, the very well-to-do town that has the University of Mississippi or ‘Ole Miss’. I stayed in an AirBNB, because all of the hotels were full. But when I lobbed up to the house there were beds, but no bedding and we weren’t allowed to rifle through their closets (surprisingly). We text the hosts and they pointed out it was a condition of staying. It was on their page but right at the bottom of page 2, interesting…. Let’s just say we had to improvise.

The US is a great place. Yes, it has issues, but generally speaking it has great people, food, wine and beer. Yes, you read right – beer. Touring the south was lots of fun with my trusty side kick – JonBoy (or our importer). Here he is dancing up storm in Memphis. 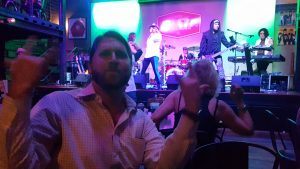 He tried to talk me into going to see Gracelands, but I politely declined. Although he did take me to a club called Raifords or as the locals refer to it simply as the ‘Disco’. If you are ever in Memphis this place has to be seen to be believed or if that isn’t going to happen just do a Google image search. Once there, you get patted down by the bouncer on the door who has a hand gun in his holster, you go inside to listen to the music of Michael Jackson & Whitney Houston amongst others of the same genre. The music also occasionally has an air raid siren go over the top of it depending on the DJ’s whim. Unfortunately, or fortunately they didn’t serve any Elderton Shiraz – only drinks on offer are BIG bottles of beer and a local spirit called ‘Fireball’. If you didn’t buy drinks that wasn’t an issue as the clubs patrons would walk around giving you swigs out of their BIG bottles. Yes, very classy I know, but this is the light-hearted blog. It sounds incredibly cheesy, but the locals love the place and it was packed!

Otherwise I was working it up as the following photos show. 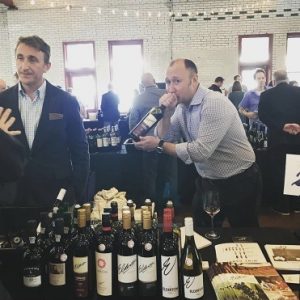 There is also a photo of Lisa, another trusty side kick, who is working hard at one of the many trade shows I attended. 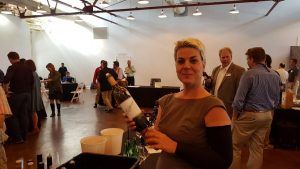 Until the next blog and with the best regards